Marshmallowed and Mittened. [Of Words I Made Up.]

Back when we were decorating a REAL tree-would you believe that I brought those snowflake pjs to Dakar? Of course you would.

And so it finally begins. :) Life in the candlelit glow of evergreen and cedar, garish cranberry-red wrapping paper and silver bells, oversized pine wreaths and the magic luster of white twinkle lights, soft flannel and garland festively wrapped around anything that will stand still. Cinnamon and cloves, apple cider and mistletoe, and the glorious vanilla snow that blankets every living thing with an easy elegance-oh, it’s finally Christmastime in the city!

And heaven and nature sing.

The whole world breathes a deep sigh of utter contentment, and wraps up in a cozy blanket. Winter days are spent red-nosed and mittened, perfecting the ever-elusive art of snow-angel-making, and evenings are filled with endless mugs of marshmallowed peppermint hot chocolate and stacks of frosted cookies that bear an astonishing resemblance to Dasher and Blitzen. Dog-eared copies of dearly loved books are read curled up in the overstuffed chair that makes it’s home by the crackling fire. [Which is indeed, as they say, absolutely delightful.]

In Paris right after Christmas last year-this is one of the last times I was cold. Bliss.

I think at Christmastime, everyone ought to move to Vermont, a la White Christmas. But then, I also ardently believe that life would be infinitely better if we all broke out into coordinated musical numbers every once in a while.

In my family, we start celebrating Christmas on Thanksgiving night-so that’s precisely what I made my team do. We ushered 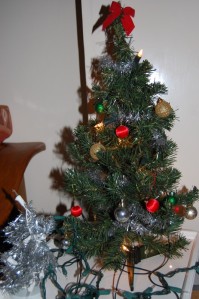 in the Christmas season with my elated announcement that for the next month, anyone who plays anything but Christmas music in my presence will be promptly lit on fire, and our first Christmas movie of the season: “Santa Clause is Coming to Town”. [The old claymation movie narrated by Fred Astaire. If you don’t own the Christmas claymation movies, run and buy them. Now.] Friday was devoted to decking the halls-and while we’re not done, [nights are currently being spent working our way through a rather lengthy list of Christmas movies over mugs of cinnamon apple cider while imagination and a pair of scissors breathe life into paper snowflakes and a cardboard Christmas tree!]-…I’ve decided to give you a sneak peak anyhow.

My only problem is that I keep blowing a fuse with all of the twinkle lights I’ve got plugged in. C’est la vie.

Christmas comes tomorrow-trim you, trim me!

Now, for the record, I want a fair trial. No passing judgement on my Christmas decorating until after next Christmas. Until then, …well, we had to muddle through somehow. :) 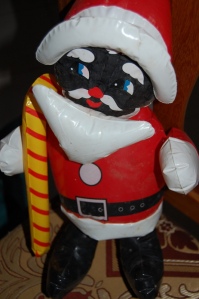 Last year, my team thought it was absurd that there were blow up WHITE Santa dolls all over Dakar. …we took it upon ourselves to rectify the situation. 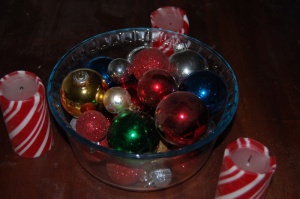 3 responses to “Marshmallowed and Mittened. [Of Words I Made Up.]”