Aside
↓ Jump to Comments

Smitten: affected by something overwhelming; to be really taken by; infatuated; enamored. 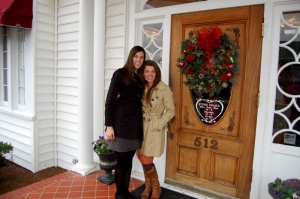 Right outside of the botique where we found her wedding dress!

Ladies and gentlemen: without further ado-I give you: the smitten list.

I promise you that his bride fell in love with him all over again.

On July 7th, Christy Seamon and David Noyd will become Mr. and Mrs-and a crowd of overjoyed former STINTers will reunite. …I just hope we’re a bit cleaner than the last time that we were all together.

2. Have I told you I’m co-leading a women’s Bible study? Probably not, given that the alleged date of my last blog was in November. But now that I AM telling you about them, you should know that they’re the bomb dot com. I am completely smitten with them. Every Thursday night, I sit down over copious amounts of baked goods [diabetics would be well-served to find a different small group] with a group of women who previously didn’t know each other. And we talk about everything. From what color our undies are [okay, maybe not the best first icebreaker question ever] to the pieces of our hearts that God is softening and making more like Himself. They make me want to be a better man.

3. The Fratties. I love them. Even if they do mock me mercilessly every time I wear heels or the color pink. They’ve been systematically trying to shame the estrogen out of me-if you ever pop in for lunch at the office, don’t ask for “Ashley” at the front desk. In an effort to butch me up, they’ve all taken to calling me “Peterson”.

4. I was home for Christmas. There is much to say, but I’ll leave you with this:

It was one of my very favorite parts.  “A thrill of hope-a weary world rejoices!” I think I love Christmas because I love the idea of hope. A reason for a broken, tired world to REJOICE. Praise Jesus for hope. 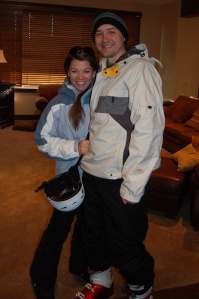 An early morning in Utah-we were on a ski lift going up a mountain about ten minutes after this was taken. Bliss.

5. I just spent one glorious week snowboarding in Utah with Kellan and his family. There was snow. There was a hot tub. There was the most divine caramel latte I’ve had since August. And there was, as it so happens, one mildly embarrassed, over-caffeinated brunette dragging her bruised hiney around Park City, wondering at what point over the past six years she lost the ability to snowboard.

That’s my story and I’m sticking to it.